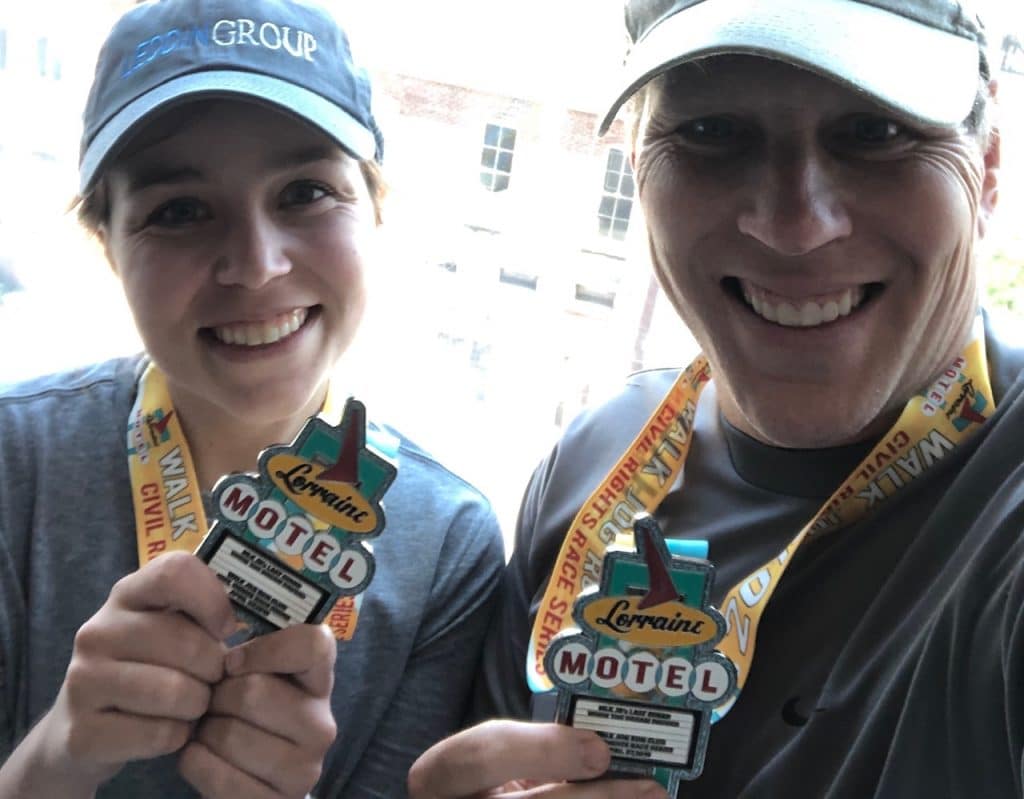 A few months ago, my daughter asked me if I would run a half marathon with her. I agreed, knowing that I would relish the opportunity to train and run the 13.1-mile race together. The weekend that we chose for the race proved to have events in several cities within driving distance of our homes – each designed to support a different charitable cause. As we looked at our options, we selected a first-ever 5K/half marathon to be held in Memphis, TN.

The race was part of the Civil Rights Race Series and was intended to support economic development for underserved communities, educate people on several Civil Rights historical events, and promote health & wellness to surrounding communities.

We felt good about our decision to run the race together and the cause we were supporting. We were motivated.When the race weekend arrived, we made the three-hour drive from Nashville to Memphis, ate a pasta dinner, and got to bed early. The next morning, we left our hotel and made the short walk to the starting line.

As we approached the site, we saw about 80 people milling about in the parking lot adjacent to the National Civil Rights Museum. The museum “is located at the former Lorraine Motel, where civil rights leader Dr. Martin Luther King Jr. was assassinated on April 4, 1968.” The location was inspiring and those preparing to run the race were motivated. The size of the crowd seemed small, especially since it was both a 5k and a half marathon, but it was the inaugural race and we didn’t think much about it.

As the race’s start time approached, we noticed a group of women posing for a picture with their medals. Normally, you receive medals after the race. We also noticed that we didn’t see a start or finish line. Nor did we hear an announcer or any motivating music.

The race start time came and went and nothing. Eventually, a line formed in front of a makeshift table where volunteers were handing out medals to all of the runners. We joined the line of those making their way to the medals’ table.

I turned to another runner and inquired about the situation. He informed me that the race had been cancelled. Apparently something was wrong with the route permit and the city told the race organizers that they couldn’t host the event.

After we picked up our medals, I turned to my daughter and suggested that we run our own race. She agreed. We walked back to our hotel, dropped our medals off at the front desk – we knew better than to go back to our rooms where our beds awaited us- and headed off on our own 13.1-mile trek along the streets of Memphis with our race numbers still affixed to our t-shirts.

Over the course of the next couple of hours, we encountered numerous runners doing their own 13.1-mile races. They too proudly displaying their race numbers with the words, “Civil Rights Race Series” written across the bottom. Occasionally, we would strike up a conversation with a fellow runner. Along the way, we met people from Georgia, Ohio, and as far away as California. All had traveled to Memphis to run the race and show their support for the Civil Rights Movement. Surprisingly, no one complained about the race being cancelled.

I thought to myself. How could someone invest their time and money to travel 100, 200, up to 2,000 miles to run 13.1 mile race on a hot Saturday morning and not be angry that the run was cancelled?

When I asked people about their positive attitude given the situation, ALL conveyed a similar sentiment – “I hate that it was cancelled and running under these conditions stinks, but it’s for a good cause.”

Is it possible that their motivation stemmed from the deep meaning they found in the event’s purpose?

They had invested the time to prepare. They had committed themselves to running the race. And, arguably most important, they were motivated by the meaning behind the run.

What about yourself and your team? Are you tapping into motivation that flows from an important cause? Do people understand the purpose behind why they do what they do?

There is a tremendous amount of energy, passion, and enthusiasm that comes when people find meaning. Don’t miss the chance to tap into that power.