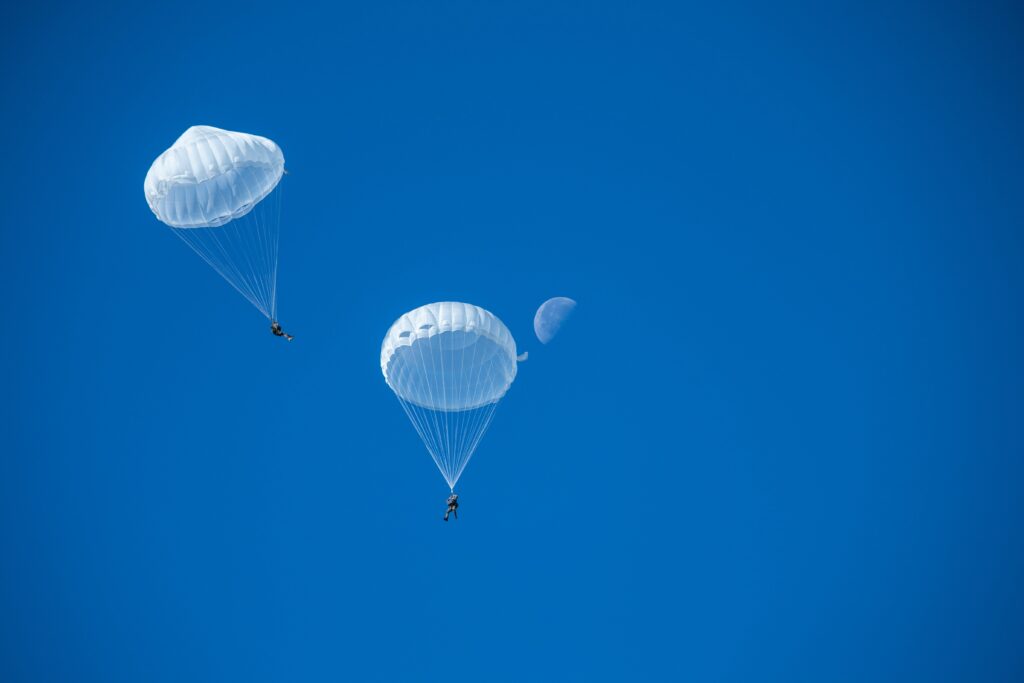 My wife, Jamie, woke me from a deep slumber with a panicked, “What happened to your neck?” Having been asleep for a few short hours and waking to a fair amount of pain, it took me a moment to respond. I quipped, “What are you talking about?” She pointed to the large bruise on the back of my neck. I glanced in the mirror to see that my neck was swollen and discolored. The pattern of the bruise resembled the bottom of a combat boot. My thoughts went back to what transpired a few hours earlier. I was participating in a nighttime parachute jump at Fort Bragg in North Carolina. There were 120 fully equipped jumpers onboard, each preparing to jump from 800 feet above ground level. As usual, when the jump light turned green, each of us would exit from one of two doors in the back of the plane. If all went as planned, 120 soldiers would be safely floating to earth some two minutes later. Unfortunately, that night, things didn’t go as planned.  Upon exiting the plane, my first order of business was to wait four seconds for the parachute to deploy. If the main parachute didn’t deploy in the allotted four seconds, I would immediately pull my reserve parachute.  I counted, “one-thousand, two-thousand, three thousand….” BAM!
Before I reached four thousand, another jumper hit me in midair. The force dazed me for a moment. I looked up to see two open parachutes, twisted suspension lines, and a fellow paratrooper. We were experiencing what the Army calls a ‘high altitude entanglement.’ Although rare, they occasionally happen. Until that point, I had been on jump status for over four years and had never encountered such a collision; however, I had been trained to react. I first learned what to do in airborne school, then was refreshed on how to respond in preparing for each of the 50+ jumps I had completed, and I was taught how to teach others to react when I went through jumpmaster school. The bottom line is that I knew what to do. I’d been trained. I had prepared. I was ready.
I looked up and saw that, although entangled and traveling at a quick rate, we did have two open parachutes. The other jumper was tangled in my suspension lines about 15 feet above my head. Instinctively, I did what I was trained to do. I checked on him to see if he was okay. After he confirmed that he was, I began walking him through the procedures of what to do in our situation. He followed my instructions perfectly. We stayed intertwined the entire way to the ground. The parachutes never collapsed, and we didn’t have to release our reserves. Yes, we hit harder than usual, and although shaken, we were going to be okay. After landing, the other jumper and I checked on each other. I recognized him immediately. Our paths had crossed in the past, and I knew him as an excellent soldier. No wonder he didn’t panic and followed my instructions.
Within a few minutes of landing, someone ran up in the darkness asking if we needed help. He explained that he saw that we were entangled and witnessed the rate of our descent. At this point, you might be thinking – That’s interesting, Patrick, but my job doesn’t require me to jump from an airplane in the middle of the night? I get that. However, I bet your job does have some distinct similarities to what I encountered in those early morning hours.
You likely:
Here are six practices to employ in the face of crises:

We’ve created a video and a tool to help you to bring these six ideas to life in your team. Click here to get started.

Photo by Jack Wilkins on Unsplash

Posted in Plan, Performance
← How to Write a ResumeCrisis at 800 Feet: Tool →