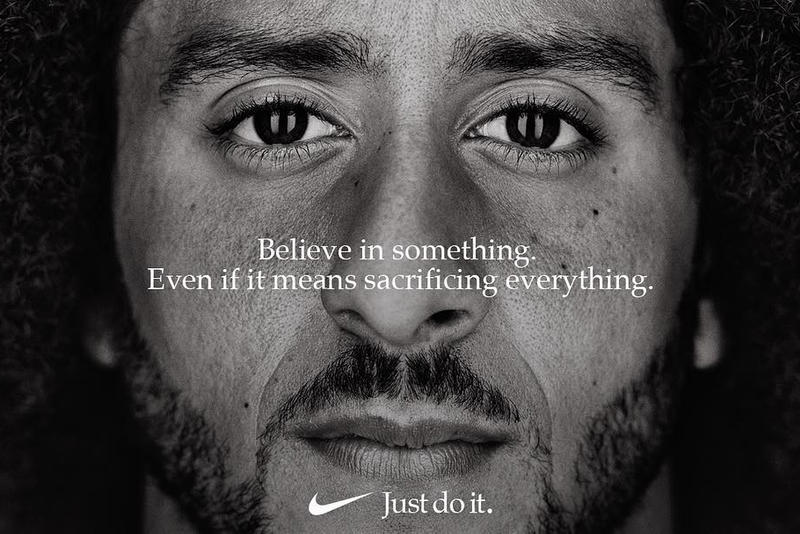 This weekend Nike unveiled their latest “Just Do It” ad campaign. The company’s well known formula of marrying the familiar tagline with high profile athletes was on display once again; however, there was a bit of a twist this time. Serena Williams, known for her dominate play on the tennis court and Odell Beckham Jr., recognized for his skills on the football field were joined by Colin Kaepernick, a former NFL quarterback who the New York Post recently called, “a lightning rod in the anthem-kneeling controversy.”

Analysts and insiders believe that Nike is paying Kaepernick a sizable sum for his involvement in the campaign. ““If you said that he was going to get seven figures, I wouldn’t be surprised,” said Joe Linta, the president of JL Sports, an agency that represents NFL athletes.” (Money)

Granted, in a world of multi-million dollar deals, Kaepernick’s pay might be on the low side, but Nike is arguably putting more at stake with the decision to use Kaepernick’s likeness. “Nike is throwing its weight behind one of the most polarizing figures in football, and America: former San Francisco 49ers quarterback Colin Kaepernick.” (CNN)

While some are praising Nike for the decision to use Kaepernick, others are condemning the company and destroying their Nike products as a protest against the company. The campaign has become a viral sensation with some supporting Nike’s decision to patner with Kaepernick:

“For anyone who believes in change, I stand with Nike, all day, every day.” LeBron James.

And other’s claiming that Nike has made a fatal error and that Kaepernick has sacrificed little to nothing.

“Colin Kaepernick made a guaranteed $39 million in the NFL. Now he’s pocketing more money in a Nike ad because he knelt on a football field. That’s “sacrificing everything?!” Disrespectful to our military members who’ve truly sacrificed everything,” FoxNews Contributor Britt McHenry.

When I step back from the hysteria and outrage surrounding Nike’s decision, I find myself wondering what it means in the long run and what we can learn from the situation.

If history, is an indicator of future results, the following three things are likely to be true within the next several months:

There is one possible game changer to all of this. Earlier this year, Trend Watching discussed five macro trends for 2018. One of those trends, Culture Clubs, focuses on consumers demanding that, “retail brands do more to promote the flourishing of their own staff.” They cite the desire of people to shop at companies that pay higher wages or go the extra mile for employees. Yes, even in the face of paying a higher price as consumers.

Nonetheless, there is a component of this trend that is worth considering. The Culture Club concept is grounded in the idea of ethical choices as a key status play.

Consumers are looking to say, “I am more ethical, I am more enlightened than the rest,” because I shop at this store or purchase this product.

Herein is where the possible game changer lies.

As I type this, I am wearing both a Nike t-shirt and Nike shorts. I like them because they are comfortable, they fit well, and Nike is a brand that I’ve worn for years. I’m comfortable with this choice. I don’t think I’m going to play basketball like LeBron James, hit a golfball like Tiger Woods, or produce an overhead serve like Serena Williams. I just like the clothes.

However, now I’m faced with an entirely different and arguably more complicated series of decisions:

This is the intersection that many consumers find themselves when it comes to Nike. Some will ignore the issue and simply wear what they like. Others will embrace the controversy and take a strong stance.

The loss for Nike will come if the majority simply decide they don’t want to be forced to make an ‘ethical choice’ when it comes to workout or street clothes. These people will simply opt to wear a competitor’s brand and avoid the issue altogether.

How this plays out is yet to be seen, but it may just end up being a game changer.

Application to Your World

When it comes to your brand and your customers. Consider these questions:

leddingroup.com
Posted in Perspective, Priorities and tagged marketing, brands, ethics, kaepernick, nike
← A Southwest Captain Shows How to Effectively Pilot a CareerGreat Leaders Know How to Create the Conditions for Engagement →